Stephanie Works, DO, is a physician who specializes in osteopathic medicine, practicing at Restoration Osteopathic Medicine in Vancouver, Washington.

Dr. Works completed two bachelor’s degrees and a master’s in health policy and administration at Oregon State University in Corvallis. While she was in college, she was in a life-threatening car accident, where she sustained a serious head injury, leaving her with severe damage to her vision and cognitive function. An osteopathic physician helped her during her rehabilitation, during which she developed a keen interest in osteopathic manipulative medicine. This experience inspired her professional interest in osteopathic medicine.

Dr. Works then enrolled at Touro University College of Osteopathic Medicine in Vallejo, California. After her graduation, she completed her residency in family medicine at PeaceHealth Southwest Medical Center in Vancouver, Washington .

Dr. Works then took a position as regional medical director for Providence Health & Services, where she oversaw physicians and the care they provided in the Portland, Oregon, metropolitan area as well as in southwest Washington state.

In her free time, Dr. Works enjoys spending quality time with her family, which includes her young son and her two South African mastiffs. 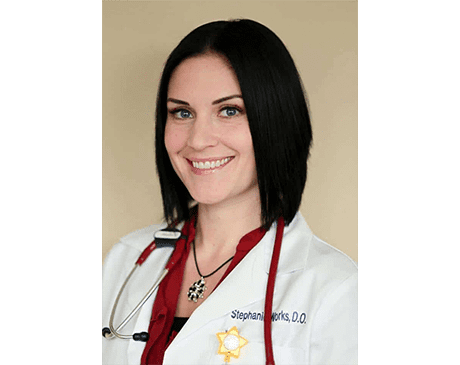